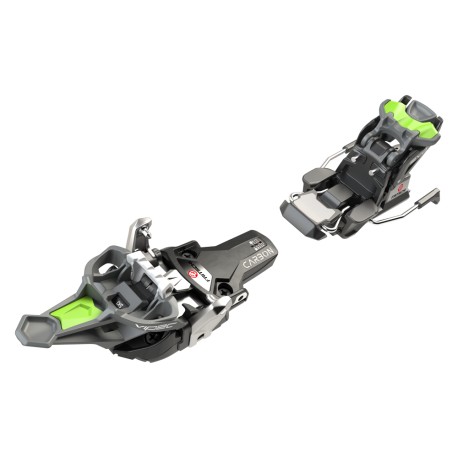 This product is no longer in stock

Ski touring with safety and comfort

With Evo it’s not only much easier to step in, it’s also more comfortable and safer to ascend. Dynamic and safe skiing included, of course. User-friendly innovations, such as the solid stop for easy step-in, lateral release at the toe, practical handling and the stable, non-turning heel unit make every ski tour perfect.

All parts are manufactured in Switzerland and assembled into high-quality products in Reichenbach. After the assembly, every binding undergoes a meticulous quality control process, including a functional test.

Minimizing the risk of injury

In skiing, significant forces are acting on material and body. The prompt release based on the preset values, a defined release, and the prevention of unwanted releases help to reduce injuries to a minimum.

Lateral release with DIN-setting at the toe

In front, same as in alpine bindings

The pin-binding with lateral release and DIN setting at the toe, where the lateral forces are acting in the event of a fall.

Releasing only if necessary

The highest elasticity of 13 mm prevents an unwanted release and cushions any lateral impact so that the ski always maintains a firm grip.

Immediate release of the boot with front release

After the release of the heel, the boot tips forward. Due to the pressure of the front of the boot on the Release Lever, the boot is also immediately released by the toe unit.

Solid support while climbing and safety in an emergency

The boot is fixed and held in the middle, but the binding will release in response to high active forces.

Clamping systems must be blocked while climbing to ensure stability.

Solid stop in front to step in

The tip of the boot is optimally positioned by means of a solid stop in front and a positioning guide. Responding to slight pressure, the system closes with the pin levers engaging precisely in the inserts.

The sequence of movements is comparable with that of an alpine binding.

Safety in any terrain and in all conditions

Switching from downhill to uphill mode and vice versa is very simple without having to step out of the binding. The three ergonomically walk mode levels can also be changed in no time with a pole.

No other pin binding offers this level of comfort in all functions.GFYTRF

7 other products in the same category: